THREE "SUMMER OF 2010" QUESTIONS!
Question #1: WHO IS TIMER DIGEST  #1 WORLDWIDE S&P 500 & DOW JONES FORECASTING SERVICE BASED ON THE PERFORMANCE OF THE LAST THREE MONTHS ?

Our answer: You have guessed it correctly, the answer is "Rosecast"
In addition Rosecast.com is now ranked # 2 market timer worldwide for the performance in 2010 so far (past six months).
Here the words of a Rosecast.com subscriber:
"It seems that ever since you started to use the GLORY DAY concept with your forecasts, you have been exceptionally accurate. "
A: "We believe that our forecasting service is getting better every day, because either our forecasts are right or we learn a great deal from our mistakes - but we noticed that change, too.-)"
Question #2: I TRADE THE EUR/USD, THE GBP/USD AND THE YEN. WHAT IS THE PERFORMACE OF ROSECAST.COM FOR THESE MARKETS ? DOES THE ROSECAST SERVICE COVER CURRENCIES ?
Our Answer:
THE EUR/USD IS THE SINGLE BIGGEST FINANCIAL MARKET IN THE WORLD. MORE VOLUME IS GENERATED IN THE EUR/USD THAN IN ANY OTHER FINANCIAL MARKET IN THE WORLD (AND THAT INCLUDES THE US BONDS AND THE S&P 500).
AT ROSECAST.COM WE PAY CLOSE ATTENTION TO WHAT THE EUR/USD DOES, BECAUSE WE BELIEVE THAT THE DIRECTION OF THE EUR/USD WILL INFLUENCE ALL OTHER FINANCIAL MARKETS INCLUDING BONDS, STOCKS, OIL AND GOLD!  FURTHERMORE THE EUR/USD WORKS WELL WITH OUR 24 HOUR INTRADAY REPORTS FOR PROFESSIONAL DAYTRADERS - "THE TAP".

IN 2010 WE HAVE NOTICED A STRONG CORRELATION BETWEEN THE EUR/USD AND THE S&P 500. THIS CORRELATION IS DUE TO THE PLANETARY ALIGNMENTS IN 2010 AND WILL EVENTUALLY DISAPPEAR AGAIN, BUT  IS GOING TO STAY UNTIL THE SECOND QUARTER OF 2011.

UNTIL THIS CORRELATION IS IN EFFECT WE HAVE RECOMMENDED OUR READERS TO USE ALL OUR S&P 500 SIGNALS FOR THE EURO IN THE FOLLOWING WAY:  LONG/SHORT S&P 500 IS LONG/SHORT EURO.

In addition, we forecast the Euro in our weekly and daily updates:
We have recently forecasted a GLORY DAY (a day with a 1% decline)  for the EURO, but have warned our subscribers that there is not enough in the skies to call a GLORY DAY for the S&P 500 and we were correct with this forecast.
Question #3: WHY IS THE BRADLEY INDICATOR SHOWING A MULTIPLE YEARS LOW IN AUGUST OF 2010?

Four of these planets "Jupiter, Saturn, Uranus and Pluto" will move into a very exact T-square in early August.
This is a very rare planetary alignment and has been referred to by astrologers as the "Cardinal Climax". Since the Bradley assigns negative ratings to square aspects and since there has never been a time before during the past 50 years in which so many squares were found among the outer planets, the Bradley will indicate a multi-year low in early August . We believe that volatility will increase for all financial markets because of these alignments. 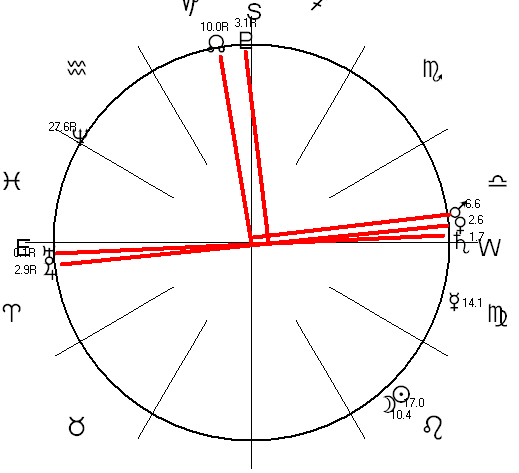 Picture above: The Cardinal Climax of August, 2010
Software: Moving Stars

The next three weeks are an important astrological period that is unprecedented during the last 50 years. Most astrologers on the world are in agreement on that, a fact that is very rare. The uniqueness of these alignments is confirmed with the Bradley Indicator which will have a multi-year low during this time. Exact market timing - the speciality of Rosecast.com - is now more important than ever... In addition to our financial forecasts we will also provide you with some general advice on how to best navigate though these historically important times.
As Jupiter (planet of fortune) is in close alignment to Uranus (planet of astrology) this is a favorable time to profit from astrology with the best performing S&P 500 market timing of the last three months.

Picture: Scientific Astrology is the Secret behind our Success!
Screenshot from our RoseCast Scientific Platinum Software!