What is Mathematical Financial Astrology ?

Can financial astrology be scientific ? Mathematics is called the Queen of the Sciences.

Furthermore we might be able to increase our probability of beating the market.

Can a scientific approach to financial astrology really work ? Does mathematical astrology exist ?

It is necessary to MAKE A FORECAST in order to use financial astrology with success ?

We will attempt to explore the above similar questions in this Rosecast newsletter.

EPISODE I: IS THIS "GRAND CROSS" THE CAUSE OF THE AUGUST 10 MARKET BOTTOM ?

In astrology a Grand Cross is defined by a planetary formation of 4 planets that must be aligned in such a way that the planets form 4 squares and 2 oppositions at the same time. Since the square and the opposition are so called "hard" aspects in astrology, a Grand Cross is usually correlated with things of a "not so pleasant nature". In a financial astrology "a not so pleasant thing" could naturally be a stock market bottom or stock market crash.

On August 10, 2011 we have observed the following Grand Cross in the skies: 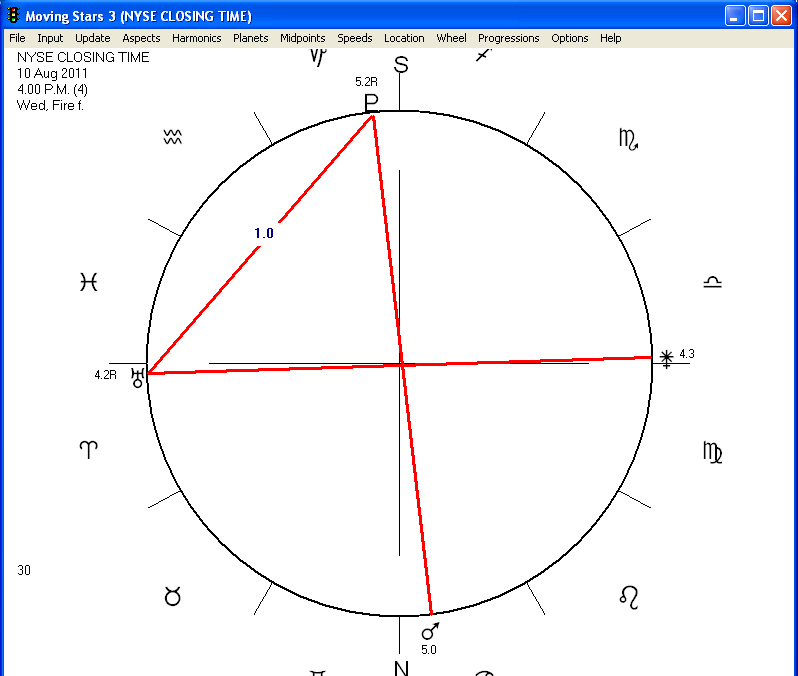 In the above horoscope - cast for August 10, 2011, 4 pm New York time - we observe Uranus at 4.2 degrees of the sign Aries, Juno (asteroid #3, the first four asteroids have been believed to be planets during the 19th century - in astrology any body that orbits around the Earth/Sun is referred to as a planet) at 4.3 degrees of the sign Libra (opposite to Uranus), Mars at 5.0 degrees of the sign Cancer and Pluto at 5.2 degrees of the sign Capricorn.
Note that decimal notations of planets in our software Moving Stars are rounded using standard mathematical rounding routines.

In astrology the term ORB signifies the distance that two planets are apart from forming an exact aspect. The closer the ORB is the more powerful the formation is. If a planetary aspect between two planets becomes exact, the orb reduces to 0.
In a formation of more than two planets, like a Trispect (three planets) or a Quadspect (four planets) the orb of those planets whose sign positions are FURTHEST apart from each other define the Orb of the whole formation.

But I caution you.

If there is no mathematical correlation between market action and planetary formation, than there cannot be any astrological cause. If the price of security X makes a bottom or a top on a certain day, than only those planetary formations (aspects, trispects or quadspects) that also peak (become closest in orb) on this day can be submitted as a valid astrological reason from a scientific point of view.

The above statement is an important truism. Hence, it constitutes the "First Rosecast Axiom" of scientific financial astrology.

Below find the horoscopes/charts for August 9 and August 11 also set for the closing time of the NYSE. 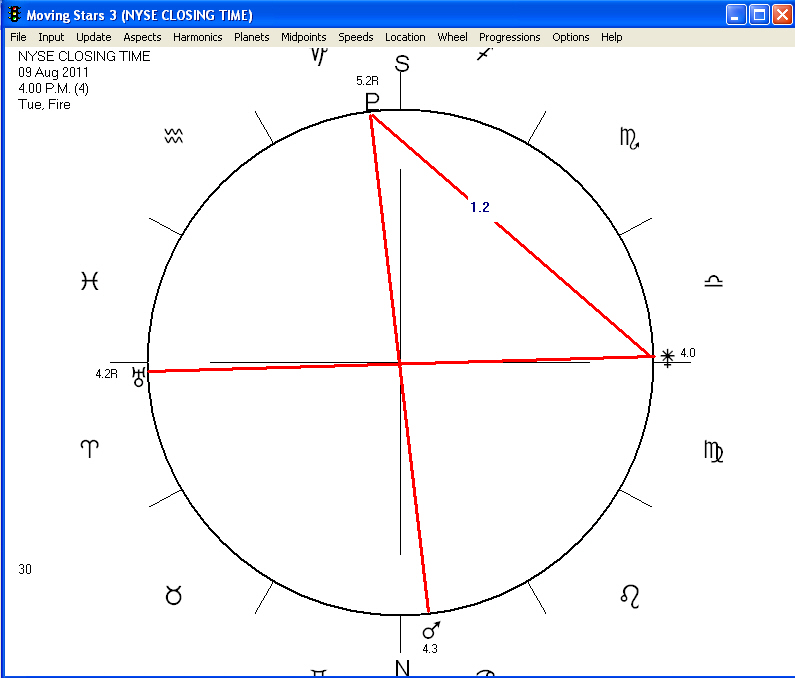 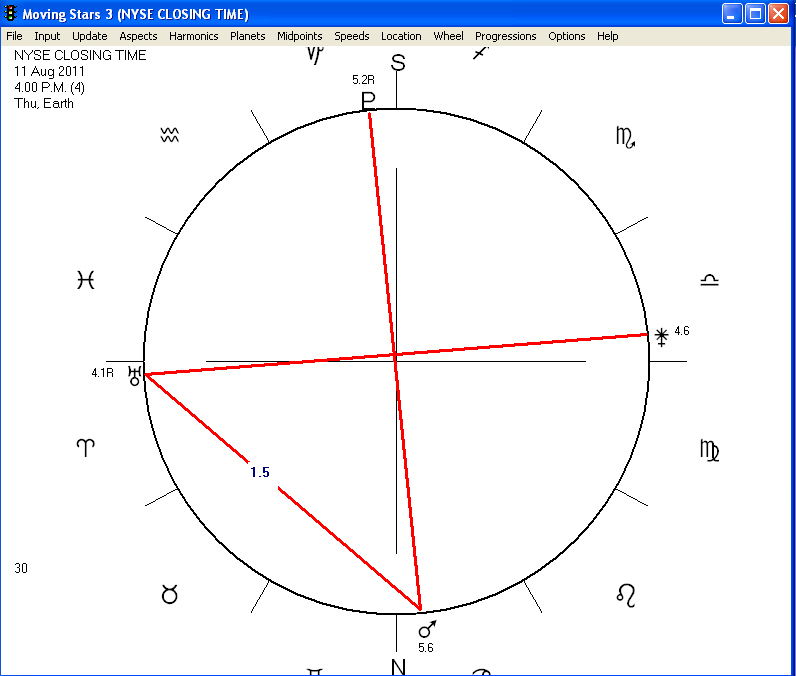 I hope you recognize that you do not need to be a mathematical QUANT in order to perform these calculations. But it helps if you use a financial astrology software that expresses planetary positions in degrees and decimals as opposed to the standard of degrees and minutes that is used in regular astrology software. Also it helps if you can cast the horoscope for the next day and for the preceding day "with one mouse click" or "one keyboard press" as opposed to perform a series of tidy steps to cast such a horoscope.

The Grand Cross of August 10 has passed the test of the First Rosecast Axiom. It is more exact on August 10 than on any other day in the year 2011.
Since August 10 was also a market bottom (for many stocks and indices) and a market top for some markets (like Bonds and Gold) we can determine a mathematical correlation between market action and planetary action.

THE MARKET/STOCK/COMMODITY HAS PEAKED/BOTTOMED AND THE PLANETS HAVE ALIGNED ON THE SAME DAY!

Does the First Rosecast Axiom of scientific financial astrology has been fullfilled.

So now let's postulate a Second Rosecast Axiom of scientific financial astrology. It goes like this:

In order to determine how extraordinary any formation of two, three, four or more planets is, we have to perform a "Frequency Test."
In order to do this we look at those planets in the formation whose orbital time around the Sun is the slowest. At Rosecast we refer to these planets as the "Controlling Planets".

We then calculate the last instances that the controlling planets have been in aspect. So in the case of August 10 the Controlling Planets are Uranus and Pluto. When was the last time that Uranus and Pluto where within 1 degree orb of 90 degrees ?
The answer is that the last time this happened was during the years 1931 to 1934. This period is commonly referred to as the "Great Depression".
In the year 2011 the only time that Uranus and Pluto were within 1.049 degrees (which mathematically rounds to 1.0 degrees, while 1.05 rounds to 1.1 degrees) in the year 2011 was between July 28 and August 10 of 2011.

This was the time period when Standard's Poors has reduced the credit rating of the USA and when the strife between Republicans and Democrats for raising the debt limit of the United States escalated. This was also the time when the market has tumbled. The Grand Cross of August 10, 2011 brought the energy of Uranus and Pluto to a peak. The last time Uranus and Pluto were similar close in suqare aspect has been during the Great Depression.

The good news is that a Grand Cross with four planets that involve Uranus and Pluto as "controlling planets" within 1 degree orb is a very rare event. There was never a Grand Cross with Uranus, Pluto, Juno and Mars within 1 or even 2 degree orb before in the period of 1900 to 2010. And there will NOT be another such Grand Cross in the years 2011 to 2050.

The bad news is that there some T-squares coming up in 2012 and 2013 that feature Uranus and Pluto as the controlling planets within less than 1 degree of orb.

The good news is that we at Rosecast.com are in a position, because of our knowledge of the First and Second Rosecast Axioms of financial astrology to forecast these occurrences to the very exact day - so that our subscribers are precisely forewarned. Because "forewardned" equals to be "forearmed" in these volatile times. Only a scientific approach to financial astrology permits to make a precise forecast that is exact to the day. Some Financial astrologers that are not aware of the Rosecast Axioms consider it even "unprofessional" to make precise forecasts like this. Obviously the reason for their limited beliefs stems from "not knowing...".

So how can we use this information as traders ? Well once the market has topped/bottomed on the day of an exact alignment we can use this information as a countertrend signal, that is "earlier" than most other countertrend signals. Therefore we can get in the market before other traders even realize that we are close to a turn. For example the new RTS (Rosecast Trading Signal) has been long on August 11 and short on August 10, all because of our knowledge that has been revealed to you in this newsletter.
Are there also some pitfalls when using this message ? It depends on how you use it. As a forecaster you are in a disadvantage as compared to a trader. For example on July 19 I have forecasted a low for July 21, because I knew that an important planetary formation would peak on that day. Once the stock market has made a huge high on July 21, I knew that my forecast was wrong and that July 21 was very likely not a low, but a high.

So in summary you have to be careful to judge any planetary formation too far in advance and to bet the house on it before the chips are counted - or to make a forecast too soon. Other than that you can use the Rosecast Axioms of scientific financial astrology to gain a measurable edge to your trading. In particular you can be alerted to the exact day when an important trend is likely to change. This is the reason for the new Rosecast newsletter that is now updated up to three times per week and focuses to 90% on the US stock market (S&P 500 and Dow Jones).

So now you have two scientific reasons (Rosecast Axions I and II) why a precise forecast in financial astrology is possible and not "unprofessional" as the dark side (the side that wants to hide the light) of financial astrology once you to believe. In the next Rosecast Free newsletter we will even shine more light on the dark and continue our discussion of Scientific Financial Astrology.